Picking up where we left off with our last report back in September, there wasn’t a whole lot to say about charters for a little while. Windy fall weather arrived and blew us out of charter after charter. We found ourselves traveling a bit to get dives in. In fact, during September and October, we spent more time diving in ponds, quarries, rivers and lakes than we did in the ocean! I have to say, diving in fresh water is nice when it comes time for dive gear clean-up! 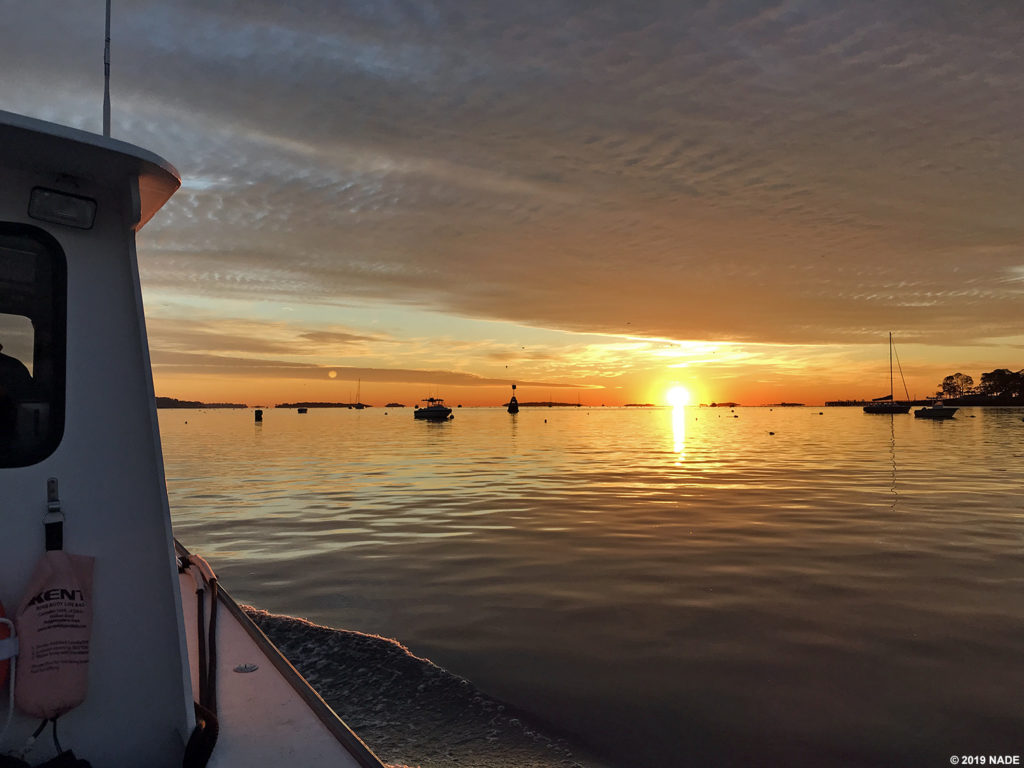 Beautiful sunrise in Beverly Harbor while en route to the Patriot.

Finally, the weather let up on us though and we managed to get back into the salty ocean in middle October. We made a trip to the Poling and another to the Patriot – it is always a gift when we make it out to Stellwagen in the fall. In fact, another boat had the same idea and two of us were out there at the same time. Although we had very low visibility inshore on the Poling, it was actually not bad offshore. Considering the weather pattern, it was actually about as good as one could hope for with about 15-20 feet of visibility. That said I was glad I didn’t bring my camera. After all, I’d have to clean it if it went in the salt water!

Weather conspired against us again soon after that, and we had more trips blown out. Our next go at ocean diving was a desperate move at getting a dive in with a trip to a sunken barge called Barge 200. There was a very good chance the dive would be a braille dive with zero visibility, but the weather looked to be so nice with 60+ degree air temps in early November that we couldn’t resist. Note to self for next time: resist.

In December 2018, the “Barge 200” sank while under tow in rough seas. The barge was heading to a dredging project site and carrying construction equipment that all together held ~500 gallons of diesel fuel and ~400 gallons of hydraulic oil. The barge broke free of the tow and sank into 100 feet of water. After the authorities did their part out there, it seemed reasonable to go dive it, and a few charter boats went to check it out. We weren’t in a rush, but figured it would be something different to break up the Poling trips in the fall/spring part of the season. And what better time to check out a new wreck when the conditions might be horrendous? Let’s go!

We found the wreck easily enough based on reported locations from the local notice to mariners. We took a few images with the Humminbird unit and then got to it. We got tied in quickly enough, but when the first divers returned the reports were grim. Basically there was no visibility. Suddenly sleeping in seemed like it would have been the right decision that day. Anyway, we had to pull the line out so that meant we were diving. We suited up and hit the water. 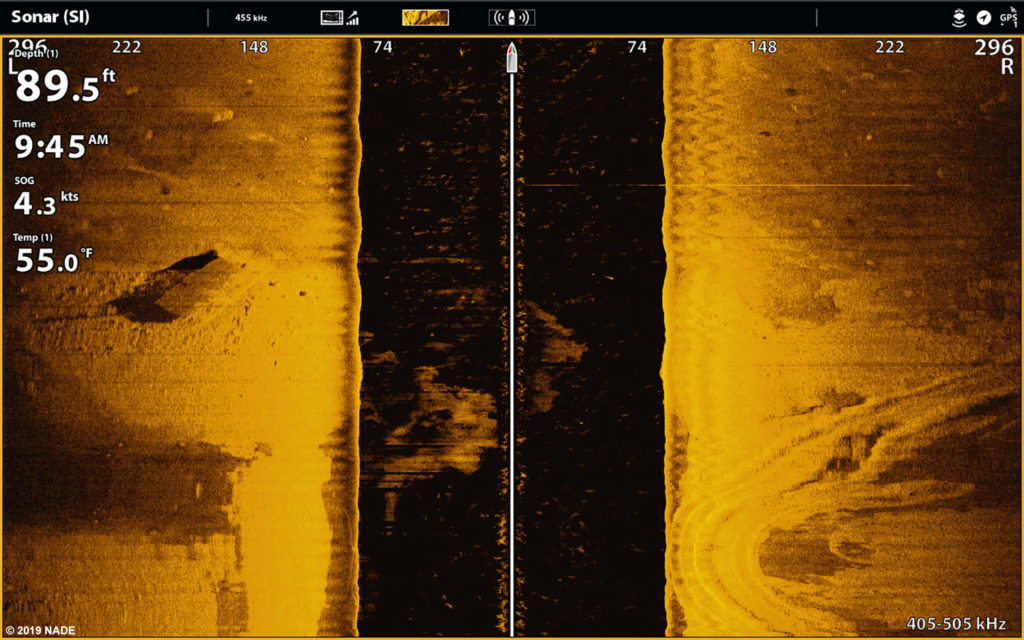 Barge 200 (left panel) might not be there much longer!

All I can say is, the visibility was nearly as bad as it gets. We spent about 20 minutes groping around following an edge as the surge and current pushed us around before calling it quits. I have no idea what we saw, but a few things were apparent. The barge was settling into the bottom so the minimum depth was deeper than reported. Since it’s upside down, it is getting more upside down as the upper structure holding it up sinks into the mud.

It was pretty sketchy and I even decided to leave my strobe on after removing it from the line and clipping it back on to my harness so my teammates could see me. Did I mention it was a really beautiful day outside? In any case, we reluctantly canceled the charter for the following day since doing an even deeper dive in those conditions didn’t seem prudent. Since then, I’ve heard the Barge 200 will be salvaged and removed from its current resting place. So much for a new wreck. This is the 2nd time we’ve dived a wreck that was only temporarily in place. Oh well.

After that things went quiet again and soon enough it was time to head to Egypt for our Rea Sea safari with MV Legends. Our plan was to spend a week diving a northern route in the Red Sea, followed by a few days of sightseeing in Cairo. It was a really fun trip and seeing the pyramids… well, I think it lives up to the hype as a “seven wonder”… The diving was also very nice; the wrecks were historically interesting and a few of them were legit “Truk caliber” wrecks. The reefs were nice too, although we tried to stick to wrecks (with this group of wreckers the crew thought we hated fish! gasp!). Here is a short clip of some Red Sea diving:

One thing I appreciated was just how windy the Red Sea can be. It was extremely windy almost the entire duration of the safari and the seas got quite rough. Because of that, we did have to spend a day diving from the rib since it was too rough to get the big boat anchored up (and for us to get back on it). Other days were borderline. And some wish-list wrecks weren’t possible. We even had a few tense moments when a rib capsized with crew members in it due to wind and rough seas. 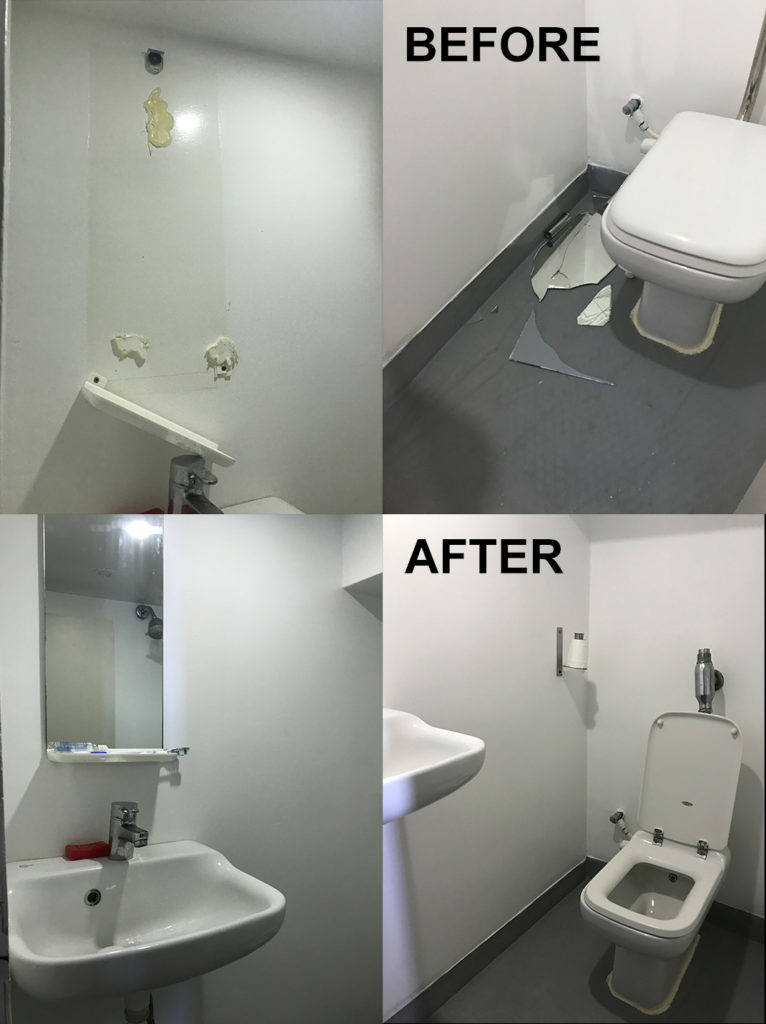 The aftermath and after the clean up.

Nothing quite compared however to my “bathroom experience” during a crossing. Since the boats do not move around at night generally, we got underway first thing in the morning. And by the time I got into the bathroom in our cabin, we were moving and beam-to in some big seas. Our cabin was also on the upper deck so we had a little extra swing thanks to physics. It got so rough things could only be described as “violent” in that bathroom. I couldn’t stand or brace myself and as a result, I hit the wall so hard with one roll that I took out a mirror, shelf and toilet paper dispenser (yes the toothbrushes hit the floor! Gasp!). I was amazed the sink didn’t come off the wall too. And I was very lucky that I suffered only a small cut on my foot from the broken glass that showered down my back and onto the floor.

I came down to the galley where everyone else was riding out the seas and told Dave that I had “a little problem” in the bathroom and we no longer have a mirror… or shelf… or toilet paper holder. We told the crew. They said, “No problem, go diving and we’ll take care of it.” Hmm, interesting. I was thinking about what we’d do for the rest of the week with no mirror in the bathroom. So we went diving, and when we came up from the dive, our cabin bathroom had a new mirror, shelf and the toilet paper roll was back on the wall—like nothing ever happened! Impressive. I wonder how often this happens?

After our time in Cairo was up, we headed home. We had some charters on the books before the year end and surprisingly enough, we got them in! The wind had let up for just long enough for us to get both days of diving in. That was amazing. It has been awhile since we’ve had to bust out the trash bags to cover gear and protect it from freezing spray. We got trips into both the Poling and then the Romance. We had some really nice visibility. The first timers on the Romance got seriously spoiled. We rarely see 25-30 feet of visibility on that wreck, but when we do, it is such a nice dive! 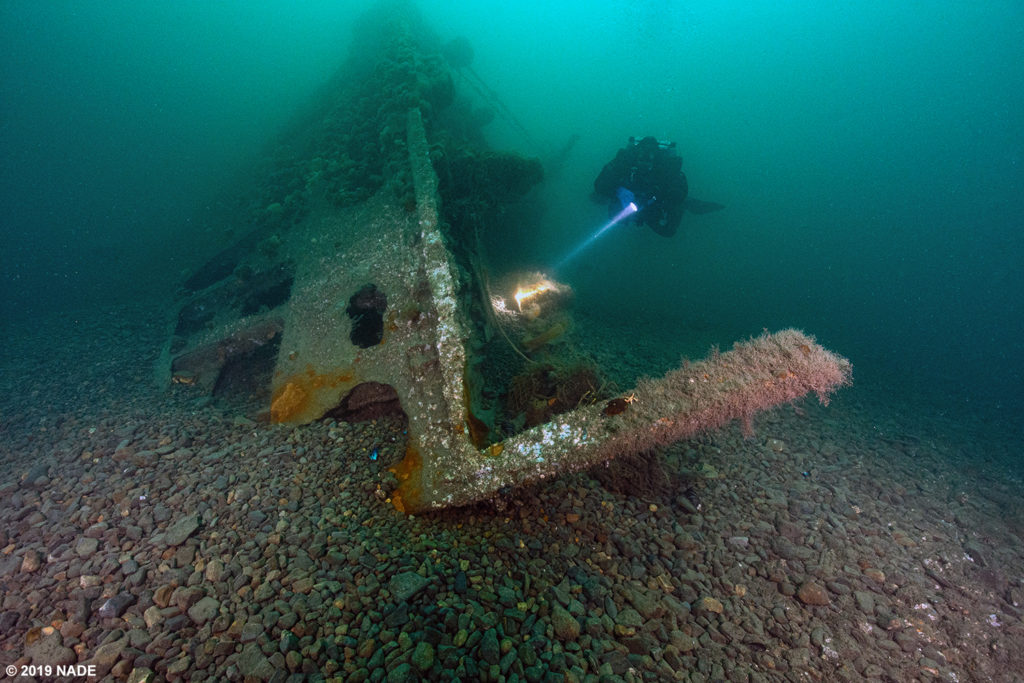 The bow of the Romance in some very nice visibility.

The holidays came and went and suddenly it was 2020, and time to roll over the dive log calculator. Although Gauntlet remains in the water, we take a break from running charters since the weather usually does not cooperate and we like to have some time to do other things besides watching marine weather forecasts. And although you generally won’t see us out on January 1, we do like to keep diving throughout the year so we headed down to Hathaway Pond for a dip in early January. Earlier this year we built a custom dive trailer—a sort of Gauntlet with wheels if you will—to help us dive more comfortably when on the road or when teaching. Check out a short video clip here:

In the middle of January, we decided to head south to Florida to visit cave country and spend some time looking at wet rocks instead of wrecks. Since we have the dive trailer now, we brought both open circuit and CCR gear with us so we could dive whatever came along.

We had a really fun trip, making some new friends and getting to do some really cool dives. Here is a short clip of a fun dive we did in Peacock:

With our dive gear nearly still wet, we beat it for New England in time for the SECONN and UCONN Avery Point dive club New England Wrecks Symposium in Groton, CT where we were presenting on the discovery and identification of the Allentown. This is an excellent dive show focused on wreck diving. We really enjoy seeing the diversity of presentations and all the cool stuff our local dive community is doing. The show will be on January 30 next year so make a point to check it out! 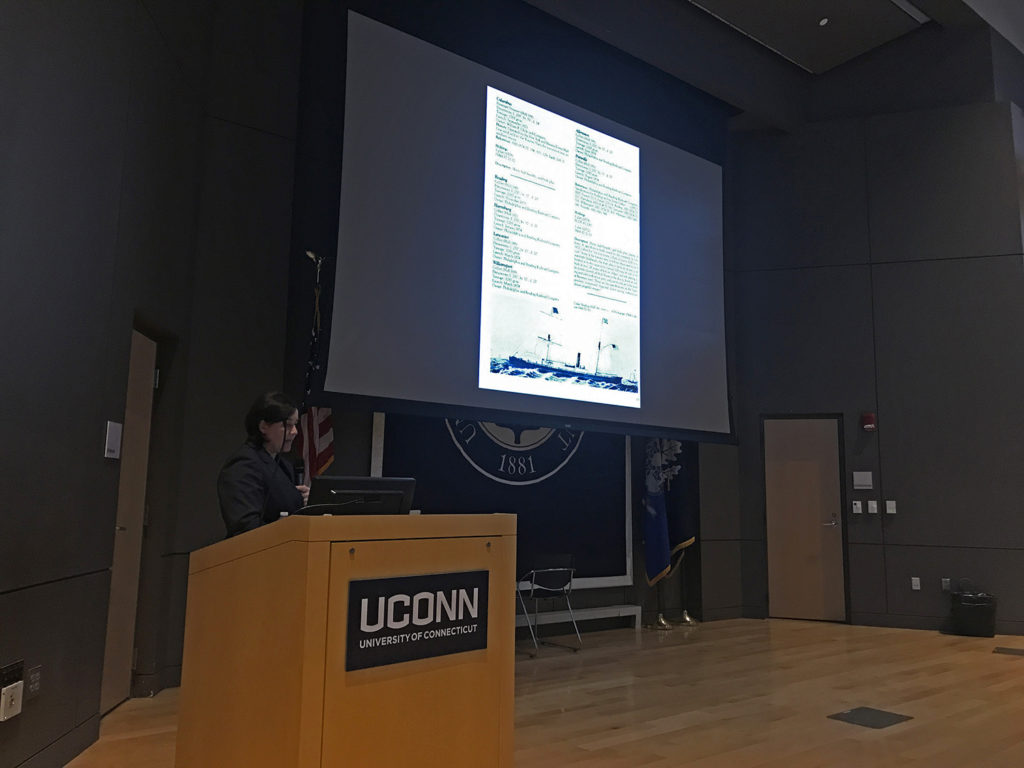 Presenting on the Allentown discovery and identification at the SECONN New England Shipwreck Symposium.

And with that here we are, approaching mid-February with a winter that can only be described as uninspiring. But this time lends itself to planning and we’ve already got some great ideas for the 2020 dive season. New year, new decade… sounds like possibilities abound to me!