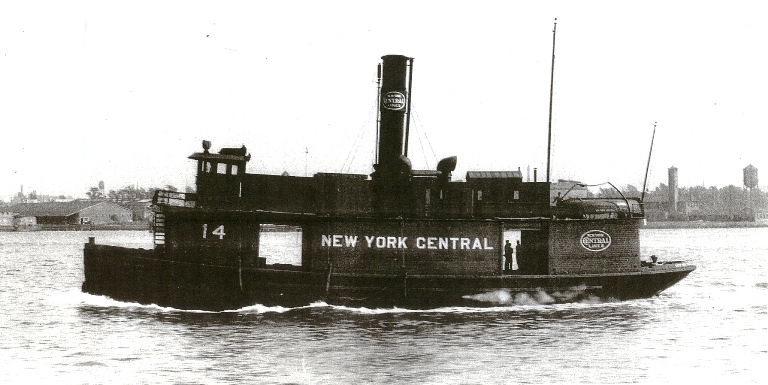 The wreck known for many years among local divers as the “Pug wreck” has been identified as that of the covered steam lighter “New York Central No. 14 (ii).” The identification of the wreck was made by Eric Takakjian after conducting a series of dives on the site over the 2006-2007 seasons and performing thorough and detailed archival research. Takakjian directed a team of divers from the crews of both the QUEST and GAUNTLET, who worked together in collecting data and measurements, as well as photographs and video footage.

The following is a summary of an article authored by Eric Takakjian and published in the Winter 2007 issue (No. 264) of the Steamboat Bill, the Journal of the Steamship Historical Society of America.1

In summary, key information was gathered that lead to successful identification of the NYC 14 II:

Obtaining precise measurements of the wreck. The wreck measured 113.9” length overall. The length between perpendiculars was measured at 109.7” and the wreck was measured to have a beam of 31 feet. The depth of hold was estimated at >12 feet. An accurate measurement of this parameter could not be obtained due sanding in of the wreck’s interior, and the hulk having settled into the sea floor to some extent.

Physical observation/measurement of key features of the wreck. This included observation of old synthetic line that was 1960s vintage. Additionally, measurement and placement of the following: stem bitts, kevel cleats, hatch location and dimensions, aft capstan foundation, and steel flanges that would have been attached to the deckhouse structure.

General observations: elliptical stern, presence of wooden guardrails. These were known characteristics of the NYC 14 II.

After its long service as a steam lighter, review of certificates of enrollment the revealed the NYC 14 II was sold in February 1962 to Capt. E.S. Wilcox of New London, CT. One month later, the vessel’s enrollment was surrendered and the NYC 14 II was lost to further documentation. First-hand accounts indicate the NYC 14 II was used as a storage facility and eventually became a floating office for the Ross Towboat Company in the 1960s after their office was destroyed when the Boston T Wharf collapsed. In 1979, Ross Towboat was purchased by Boston Fuel Towing Company. There is no record of the NYC 14 II being part of Boston Fuel’s vessel fleet and thus it is believed that the NYC 14 II was scuttled sometime before the sale of the Ross Towboat. This establishes a fairly wide window, placing the sinking sometime between the mid-1960s and 1979. Research efforts to uncover further details pertaining to the sinking are ongoing.

The NYC 14 II was originally located in 2002 by Bob Foster and presently rests in 120 feet of water in Massachusetts Bay. Until 2018-2019, the main deck can be reached in approximately 105 feet of water. However since then the wreck is collapsed and forward of the engine and boiler is a debris pile of hull plates. Aft of the engine the wreck is still partially intact but is very unstable and fragile. The rest of the wreck could collapse at any time. As of 2018, the minimum depth of this wreck is deeper and should be expected to be 110-120 feet in depth depending on the tide.

The seafloor in the area is a mud/clay composition and visibility at this site tends to be lower than average at about 10-15 feet. Certain times of the year the visibility can be much better, but it is generally highly unpredictable. Currents at the site are light and the wreck is easily navigable given its small size and the intact nature of the hull itself. The hull is also covered in anemones and a multitude of marine life typical of the area. This wreck also makes a good site for advanced recreational or entry-level technical diving training, as it is relatively free of hazards, provides for a platform by way of the open deck and rests at a depth convenient for introducing students to real gas management and decompression planning concepts.