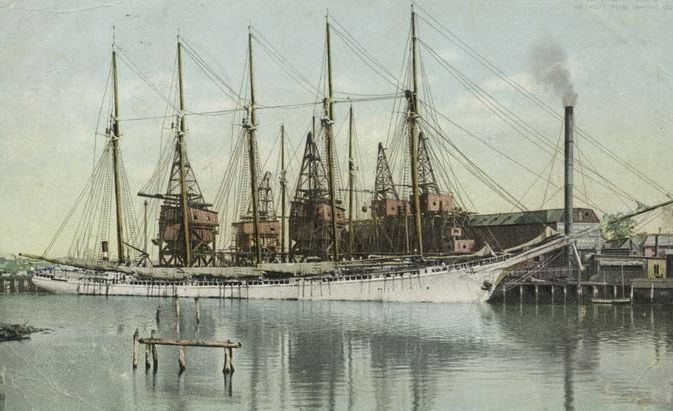 The 5-masted schooner Paul Palmer was built in Walderboro, Maine in 1902. The Palmer – a 2193 gross ton vessel, with dimensions of 276 feet x 44 feet x 24 feet – was among a fleet of coal schooners built for Willam H. Palmer for use in the Palmer family’s New England coal trade. As the 20th century signaled the decline of the New England coal industry, the Paul Palmer, among other vessels of the Palmer fleet, were purchased by J.S. Winslow and Company in 1911.

Under Winslow ownership and the command of Howard B. Allen, the Palmer departed Rockport, ME on Friday, June 13, 1913 destined for Newport News, VA where she would pick up a load of coal for the return voyage. There were 11 passengers and crew onboard – including the captain’s wife and a female guest. At some point on June 15th, a blazing fire was observed by the lighthouse keeper at Highland Light off Race Point. The passengers and crew abandoned the schooner and it burned to the waterline despite a 3-hour battle to quell the fire. The passengers of the Palmer took to lifeboats and were picked up by the schooner Rose Dorothea, bringing the victims into Provincetown. The Palmer finally succumbed to the flames in the evening hours and sank, with her masts and rigging partially exposed breaching the surface.

The cause of the sinking was not immediately known and the cutter Androscoggin was dispatched from Portland, ME to destroy the remnants of the hulk so as to avoid a hazard to navigation. Today, the Paul Palmer sits in approximately 85 feet of water on the southern portion of Stellwagen Bank NMS. As the hull nearly burned completely prior to sinking, the remaining amount of wreckage is small. The wreck site mainly consists of a “footprint” of a large schooner with the largest beams of the keel running down the centerline of the wreck. The chain pile and winch are evident in the bow, and a small section of hull comes up along the port side in several places. Otherwise, varying bits of wreckage protrudes from the seafloor, with an auxiliary anchor located aft, and bitts scattered about the perimeter. While the wreck is low lying, and mainly sanded in there is much to see in the way of marine life. This wreck is home to an abundance of large and diverse marine life, some of which appears almost tropical in nature. Large ocean pout, wolf eels sculpin, sea ravens, lobster, and anemones, tunicates and sponges are found all over the wreck. There are very few – if any – wrecks that we have explored in Massachusetts Bay that are so ‘alive’ – it is truly impressive. While this wreck is more reef than traditional shipwreck, it remains one of our favorite dives in the area.